skip to main | skip to sidebar

Last week our Skype group had a pretty frustrating experience. We were trying to play a game that just didn't work all that well with our play style, and the game wound up sucking to a complete halt. We were feeling pretty discouraged and wanted to play a game that we knew from experience would bring the awesome. Our solution? Hero's Banner.

(Side note: For a while after we picked up the game in 2006, we were pretty obsessed with this game. We group went through a phase of playing Hero's Banner whenever we needed a one-shot game.)

And man, Hero's Banner did not disappoint. Briefly, the characters we have are:

Octavian: crazed would-be emperor, in love with his twin sister
Vasilica: almost looked like he was going to be a nice guy until he had his father, the king, murdered in the heat of battle
Casimir: Was almost a priest when his elder brothers were killed, is tempted to break his vows by his gay lover, is actually a nice guy
Magdalena: feminist member of the high nobility, lesbian, might be a decent human being as well

Kit went to town GMing, and last night's session was HOT. Aaron wound up having a conflict to *not* brutally murder the man his sister was betrothed to. He failed, mostly on purpose, and creeped everyone the hell out.

Vasilica, amusingly, had an emotional breakdown in his very first scene, slapped his father (the King), and charged off with an armed contingent to protect something his father had told him not too. This was made extra awesome in the next scene when he was surrounded by his father's men and ordered to stand down. He did, but in the battle that he didn't take part in, he had his father murdered and then "avenged" the murder.

Magdalena, had a perfectly horrible scene where her mother was pressuring her to have dinner with an odious younger son - owing to the fact that all of her brothers had been killed in the wars and she needed to marry well, but not too well, so she could have a son to pass their family name on to. There was a perfect moment where Magdalena was lippy and tried to bring up her brothers and her mother basically said they didn't matter.

Needless to say, the younger son she was to dine with was insipid and horrible and Magdalena refused to see him again. Later that evening he came to her rooms and made her look like "damaged goods" (I failed my roll and re-roll both) so that no one else would want to marry her. And the next morning her mother started talking about plans for the nuptuals, making the comment 'I didn't think he had it in him'. Horrible.

Casimir got off to a slow start in his first scene; his mother tried to persuade him to steal from the church to pay for some of their family's massive debts but Casimir resisted. His second scene went much better, though. His bodyguard and lover, Gavril, was revealed by Casimir's mentor - a priest - to be a heretic. Casimir's mentor said he had two weeks to either cast him aside or see his friend branded as a heretic. When Casimir confronted Gavril, he promised to reform (he was lying) and then distracted Casimir with sex. Rawk.

Anyway. I did some sketches of last night's session. Octavian came out every bit as psychotic and disagreeable on paper as I pictured him in my head. 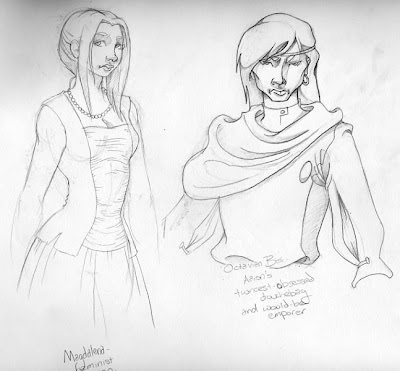 I'm very much looking forward to our next session, which sadly might be a few weeks from now. Still, pretty happy that Hero's Banner has come through once again.
Posted by wundergeek at 9:30 AM
Labels: Hero's Banner, sketches

What a fantastic game. I can't wait for the next session! If for no other reason than to get Vasilica a portrait. *wink* *wink*

still working on that third dimension

wundergeek
Ontario, Canada
This is my art blog, wherein I shall post drawings, sketches, photographs, and generally talk about my ongoing creative projects. For more information about finished creative works, or information on how to contact me, mosey on over to BrowserBeware.com.